I am not a Roman Catholic, but I liked the Pope anyway.
Almost as soon as he took the power of his religeon, he began changing the world, Karol Wojtyla who knew peril as a young man at the hands of the Nazis, went right back into Poland and courageously stuck religeon into the face of the communists. And confronted with such a resolute adversary as this single Holy man, they never recovered. Yet he was shot for his efforts by a Turk, supposedly put up to it by the Soviet KGB, who could see that he was a dangerous man challenging their future. 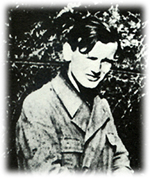 Solidarnosc (Solidarity) was born because John Paul II provided daring leadership and gave his people hope and power, and consequently, oppressed people everywhere shared in that new power. It was not only about religeous freedom, but liberty for all humanity.
In the ensuing years the momentum from that historic and gutsy visit caught hold. He started the chink in the wall that brought down the Iron Curtain and freed most of Eastern Europe from the oppression of a generation of forced communism.
Pope John Paul II gave the people of Poland a new respect while using his religeon for the highest purpose. He gave hope to people of every country. We all owe him big time.
And no one tells Polack jokes anymore either.
Posted by Caterwauler at 3:34 pm