It seems to me that here in the 2012 NHL playoffs we are watching the demise of hockey.
Many agree that the best hockey ever played were those games against the USSR in 1972! It was fast, furious, full of speed and skill, and to our surprise at that time, full of bone rattling hits by the Russians! Tough hockey. And yes, before you dump on me, dirty stuff going on as well.

But here we watching a changed NHL. Full of concussions and serious injuries. And to the best players in the league. The players people pay to watch! The ones who have thousands of kids wearing their jerseys. We lost Sydney Crosby for most of a year to concussion. The player who won the gold medal for Canada!
What is concerning is the mentality of the league today. The macho attitude that a player looking down is fair game to be maimed. It seems that some teams are actually marketing with the slogun, 'There will be blood!'

Daniel Sedin was unaware of the check coming from Duncan Keith, and the elbow with intent to injure that put him out. It seems the attitude is be tough or get out! Or we'll put you out. Coach John Tortorella said it recently, 'the players have no respect for each other.' It goes a step further, the league has no respect for the players that earn it money. Aaron Asham's viscious cross check was a retaliation for a hit that did not concern him! Yes there are suspensions, but did that stop Raffi Torres, a repeat offender, from that deadly check at full speed to the head of Marian Hossa? You can often see the predatory player head-hunting as he winds up looking for the hit instead of the puck! And the 'fans' stand and cheer after that hit, at least until the hush when the player is unresponsive on the ice. Then we hear endless talking sports heads saying, no one means to hurt. Yes they do. 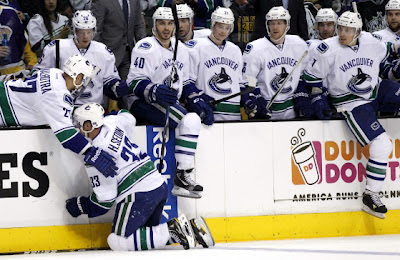 So because Henrik Sedin was unsuspecting, does that give one a pass to hurt him at will? If you saw the Darcy Hortichuck attempt to elbow Ryan Kesler you would be sick if he had connected. And Kesler's career would be over.

And what do the sports media add to this? They go back to the Daniel Sedin hit on Duncan Keith and say Daniel started it by checking too hard! Therefore, in the macho NHL media spin, he was fair game for whatever. The mentality is that if a someone jaywalks without using a cross walk, it is okay to run the person down? Some would say the whole attitude of the Boston Bruins is to hurt everyone you can, not with hockey but with fists and sticks. Don Cherry criticizes Crosby by saying he should not play so tough if he doesn't want to be hurt. ???

Actually smashing a player's head into the glass doesn't even get a suspension, because he was a star player. Doesn't it drive home the idea of disrespect? Is there a new tier in the NHL? Do we need to identify the level of player to judge the infraction? Maybe have the elite players wear blue armbands and they get five hurts and the fringe wear red and get only two? Why not give out colored brass knuckles? 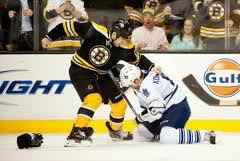 The referees are much to blame for this. The calls will always be to keep the game equal. The league does not want an 8 - 1 game. The calls will be tailored to even it up. But then the refs get their orders from the league, don't they.
It boils down to disrespect for the players among themselves, and the very fact that some are out to hurt others, shows the disrespect for their own game. Sportsmanship has ebbed away in the business of hockey.
If this is not corrected by getting this attitude out of the game, we will have nothing remaining but cage fighting on ice.

Hockey registration is way down. Mothers are taking their young boys out of hockey faster than you can say concussion. Yet if you look at the games, the hits the fights the tackles and take-downs, the current NHL fans are loving it. They see the players on ice as nothing more than warriors, maybe even gladiators. It is a matter of time before we have a player on one team as the Masked Marvel?

And it seems only a matter of time until a player is taken off the ice on a stretcher, unmoving, and we hear later he has died from his injuries.
It is only a matter of time until we no longer have Gretskys, Crosbys, Bossys, Sedins, Toews, Iginlas, Yzermans etc. Because these types of players will have little interest in the potential of living in a lifelong daze and the fans will miss the exciting skill and speed.

Or will they? It's all about players having respect for their own game.


addenda: 3rd liner Raffi Torres gets a 25 GAME suspension for that hit on Hossa. Compare to a pocket change $2500. fine for 1st liner Shay Weber for a head grab and smash into the glass! If that is not 'intent to injure', what is? The NHL is a sad example of disgraceful officiating.
Posted by Caterwauler at 11:31 am 2 comments