REpost from 2005, still crazy after all these years

California decided that those great white hunters who are flocking to a Texas based hunting website, shouldn't go there anymore. I don't mean those brave courageous hunters who frequent the chain-link fenced hunting sites in Texas for the thrill of killing some grazing Bambi while safely outside the fence in their pick-ups, I mean 'hunters' sitting at home on their computers and with a computer mouse click, actually causing a gun to shoot a deer or whatever animal! Did you know this was happening? 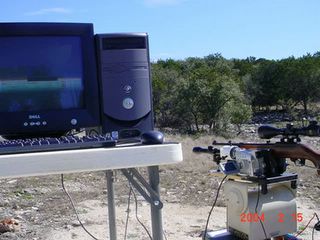 Can you believe it? Can you believe that there are people in the world who would do this? You sit there at your computer, click your mouse, watch the monitor, 'stalk' a deer, get it in your cyber sights, CLICK, BAM! ... death. Wow. I mean REAL death. Brave. A real hairy chest beater, isn't it? They even send you the animal remains! Is there any limit to the masculinity? The bravado? The idiocy?

Fourteen other states are about to ban computer hunting too. I am worried that the technology might be turned to more sinister directions. Like hunting random people! Is it a matter of time until Homeland Security or the Minutemen set up this stuff on the Mexican border? Or someone suggests that frying all those deathrow inmates is just boring. (Texas executed 33 people in 2002. No count of the animals executed.)

You know who these guys are don't you? They're those men who go down to their basements after dinner, (served precisely at 5 pm) while their wife or mother cleans up the dishes, washes the floor and prepares their pipe and slippers. They tuck in under the stairs, fire up the computer, check out the porno sites, feel the reassurance of something hard between their legs, which is their Daddy's Smith & Wesson, and go hunting.
The hunter websites actually say computer hunting aids the handicapped hunter. (isn't that the inherent quality of ALL hunters?) Some of these closed hunting ranches even have specials; One mature turkey, plus one hog, and unlimited coyotes, all for just $500.! What? No cows? Almost like a Safeway grocery special isn't it? Others are importing exotic animals from around the world, Barbary Sheep from North Africa, Blackbuck Antelope, from India, etc. "What the hell," Bubba says, "there jist ain't anuff critters ta kill out here in Texas." Spit

The web-sights are from the same ranches who breed domestic deer in confinement for killing, these ranchers have brought themselves into the 21st century.
Too bad their brains didn't make the trip.
Scary though, isn't it?

Posted by Caterwauler at 5:23 pm 0 comments

I don't know about you, but I have a healthy respect for bears. I have seen some in the wild and am always impressed by their apparent health! Bears are magnificent but I try to stay away from them. We are displacing them from their territory every day and they have no where else to go so when we infringe we might expect a violent result. When I see them as mauling a hunter I have no compassion for the hunter. Yet they are hunted always as a trophy to represent the courage and prowess of the great white hunter.

Canuck's winger David Booth's idea of hunting has a different twist. Perhaps not brave enough to enter our wild country in BC to hunt a bear, David went to Alberta where 'bear-baitng' is legal.

The term "bear baiting" may be used for the hunting practice of luring a bear to an arranged killing spot with bait. The 'hunter' places an amount of food, such as raw meat or sweets, every day at a given spot until he knows the food is being taken each day. Told by bear tracks. He then chooses a day to await the bear, killing it when it arrives to feed. Such bear baiting is legal in many states in the U.S. The Humane Society reports that, Bear baiting is banned in 18 of the 27 states that allow bear hunting. Sometimes, in those nine other states, bear baiting can account for up to 75% of the 'hunting' bear deaths.

The hunter needn't even get out of his car! No need for camouflage clothing, even Bozo could do it in full pink and yellow costume! So much for stealth, bravery and skill in the wilderness.  Why not just start up your pickup and run over the animal? In this case, the bear was just sniffing around at the bait when killed!
Booth defended himself by posting a video link on Twitter. “You all know i (sic) shot a bear heres how ... you have every right not to watch just like i have the right to choose to hunt,” he tweeted along with a YouTube link. Evidently he was involved with a TV program called the Edge. (not joking)
YouTube, reacting to the disgust of so many took down the video.

It is not the fact that Booth was hunting, nor that he choose the cowardly practice of baiting to kill, it is the fact that he was proud enough to display his ignorance of wild creatures on a social network and the inconsideration of his position as a public person looked up to by many impressionable kids that reveals Booth's character.

I wonder if this is the kind of mentality we want representing the Vancouver Canucks? The fact that he makes over four million dollars a season and has been at best a fourth line player is enough to consider trading him this off season. Time to go, David, and take your big black rug with you.

We need better character than that on a Canadian team.

Posted by Caterwauler at 3:04 pm 0 comments