Any truth to the rumour that the owner of the Whitecaps has large land investments on the downtown east side which are not worth much but would be worth many millions more if a stadium was built down there? Another hmmm.
Couldn't they expand Swanguard Stadium by simply building another seating bleacher OVER the existing parking lot? No more land would be used, the parking lot could still exist, and Swanguard would double it's capacity.
Or, why not play in BC Place? It is already a world class venue.
Or, couldn't they build a great stadium south of Exhibition Park race track right on the waterfront? Bring back that great view that everyone loved from old Empire Stadium? The parking would be already available so it would take no additional land.
Hmmm.
Posted by Caterwauler at 11:14 am 2 comments

Palestinian militants BURROWED under a wall separating Gaza from Israel and kidnapped an Israeli soldier. Israel is pissed about this of course. The Gaza militants have demanded that Israel release all the women and youths held in Israeli jails in exchange for the hostage. Oh, they added, and release all the MINERS too.
Can there be a sense of humour here?
Posted by Caterwauler at 8:44 am 1 comments

Blockbuster trade?
They're making it sound like we got a bundle for Bertuzzi. Hmm ... maybe not.

Bryan Allan, young, up and coming defenceman in the Chris Pronger style vs Lukas Krajicek. Maybe even up for the trade but why trade him at all?
Advantage - ?

Todd Bertuzzi became a 'throw in' for nothing in return. Dave Nonus was under political fear to get rid of Bertuzzi. Keenan knew that. Nonus should have waited almost until the season began to trade Bertuzzi. We give up Bertuzzi's 5 million to get Luongo's 6.5 million, meaning we'll still have to let Jovanovski go. Where? To Florida of course.
Advantage - Keenan.

The sixth round draft pick we got? Keenan traded someone the next day for another sixth round pick.
So now we'll get the spin. The same as when we had two of the best players to ever lace up for the Canucks, Pavel Bure and Alexander Mogilney and they told us we were 'rebuilding'. Remember? We got that slackard Mark Messier about then too.
No wonder so many fans at GM Place cheer for other teams.

Back to Top
Posted by Caterwauler at 9:22 am 4 comments

Well, the CBC is pre-empting The National news for an American reality program. It seems they pre-empted Hockey Night in Canada for ... what WERE they doing in that final game between Edmonton and Carolina?


UPDATE: The Americans cancelled their program.
Posted by Caterwauler at 8:21 am 5 comments

As we are often considered a political blog, we feel we should be commenting from time to time on individual MPs running our government in Ottawa. So we start by having something to say about our current Environment Minister, Rona Ambrose ....... 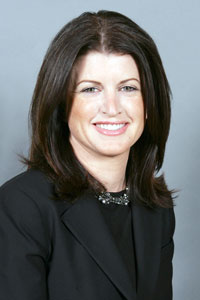 Tamara Hoover, a Texas school art teacher has topless pictures on the web. Posted there by her partner. She is a skinny blonde who wouldn't have much to show even if you could see it. But in Texas, this is serious. She's about to lose her job. Oh no, not another teach in trouble with nudity?

Better to have little Billy's room plastered with pics of Stallone beating someone to a bloody pulp, or Arnold blasting a hole right through a body, than a photo of a female art teacher.

This kind of explains the growing attitude of disdain towards women down there and the violence among young boys, doesn't it?

None o' that neked stuff here in Texas, folks, we're a whole 'nuther country.
Posted by Caterwauler at 8:32 am 2 comments

Back to Top
Posted by Caterwauler at 9:52 pm 0 comments

Humpback whales are the most commonly known species of whale to many.
We have whale watching tours off Victoria BC. And who has ever gone to Hawaii without at least seeing their spouts on the blue waters. Or been on a catamaran when a humpback 'mugs' the boat, swimming directly beneath it at close range. Or when one 'breaches', taking the observer's breath away with the huge splash. The gentle behemoths are loved by anyone who has ever seen or heard them. 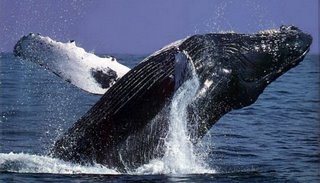 World wide, when commercial whaling was stopped about 20 years ago, their numbers were down to 20% of their world-wide population. Since then, they have only recovered slightly. They are still red listed.
Japan has recently stated their intention to begin slaughtering more than 50 humpbacks a year. Resuming whaling without the International Whaling Commission's permission. They currently slaughter each year over 1000 minke whales and fin whales. The Norwegians about the same. The Japanese are using a loophole in the regulations and say they will take them for 'scientific research'. We all know they will be slaughtering these wonderful creatures to feed the lust for whale meat and oil that oriental people want to consume for whatever reasons. Similar, one suspects, to eating Bengal tigers to improve sexual prowess. (no evidence anywhere to support this silly theory)
The Japanese murder whales with special grenade tipped harpoons. The creatures dies a horrible prolonged death. Liken it to a human being murdered with firecrackers implanted under your skin.
This needs to stop. Whales have no threats to humans on this planet. They are benign beautiful creatures.
Let your voice be heard by at least signing a petition on the following website;
http://wspa.org.uk/index.asp

Other actions you could take would be to let your feelings be known to Japan, Iceland and Norway by urguing them to abandon whale meat and preserve a wonderful part of life on our planet. And tell everyone you know about this misguided Japanese lust for whale meat. You could also picket your local Honda dealer. Cause them to put pressure on their OWN governement.
http://www.thesun.co.uk/article/0,,5-2006280068,00.html
http://news.independent.co.uk/environment/article1090214.ece
Posted by Caterwauler at 9:56 pm 7 comments

Guardian Angels - why not?

The consensus seems to be about even on the reception to the Guardian Angels coming in to Vancouver. Yes or no. It seems however, that most people are not really familiar with what they actually do.
The Guardian Angels are not trying to be a police force or a vigilante group, beware of the motives of people who tell you they are. They are simply being on our streets to be eyes and ears for our Vancouver police. Their intention is to help people like drug addicts, the homeless and perhaps prevent injustices to those most vulnerable. IF a situation arises that needs police attention, it will be handled by Vancouver Police Department, hopefully responding to what a Guardian Angel sees or hears.
In previous incarnations, a lot of Guardian Angels' activities were put down in many cities. (they were here from 1983 - 1988) This resistance is often from police forces themselves, protecting turf, hesitant of anyone nosing into their business. However, patrolling our streets seems to have no downside when we know there are just not enough police to do the job. Surely anyone who frequents the downtown core often enough can see drug dealers on almost every corner. Transactions go on within sight of community policing offices! There aren't sufficient resources for VPD to be everywhere. Law enforcement should welcome them, we know the criminals won't. We're hoping the Guardian Angels will establish a rapport with VPD.
In some cases organized crime took their own actions against the Guardian Angels. Founder Curtis Sliwa was actually attacked in a locked cab by a hitman and only escaped with his life after being shot several times. The hit was allegedly ordered by Junior Gotti.
Surely having someone out there on the side of law abiding people can only be a good thing. The situation in our town is only becoming worse. Our police need all he help they can get.
Welcome them to Vancouver.

oh, was that about terrorists? I thought it was a Canadian citizen opinion poll.
Posted by Caterwauler at 4:38 pm 2 comments

The aquarium wants to expand. Again. They want more of Stanley Park. Again. The park dedicated by Lord Stanley for everyone in Vancouver to enjoy.
Some folks think they should just get out of Stanley Park completely.
The promotors don't want a referendum on their expansion plans because the details are too complicated for us taxpayers to understand. Hmm.
They seem to have enough area to accomodate several hundreds of convention participants for dinners. What has that to do with the display of sea creatures? How did they come to host conventions? Do they want to build a new otter pool so they can expand their convention facilities at the same time? Sneaky if you ask me.
Complicated?
Maybe, but the public has an uncanny knack for knowing a scam when they see one.
Posted by Caterwauler at 8:06 am 4 comments