Is this the truth? 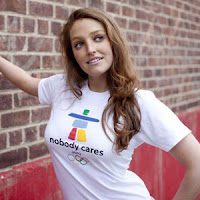 Posted by Caterwauler at 6:49 pm 2 comments 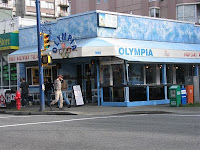 Mosi Alvand, owner of Olympia Pizza on Denman Street. One takes one's heroes where one finds them.
Posted by Caterwauler at 8:28 am 4 comments

Gordie Robertson started to get publicity a few weeks ago because he was a gold medalist in the 1952 Olympic Games in Hockey! Playing forward for the Trail Smoke Eaters in Oslo, Norway.
Gordie is now 83, an entertaining character and still a native of Trail, British Columbia.
After appearing on several radio staitons to express his disappointment of not being able to attend an Olympic event, a caller to a radio show gave him a ticket to a hockey event, the Canada Swiss game, even volunteering to put him up at his home during his stay in Vancouver.

Olympic organizers weren't prodded into seeing their mistake and it took another torch bearer to step aside to allow Gordie to carry an Olympic Torch, (not like the one below) as part of the relay passing through the Kootenays.

Of course, many people are thinking; Why wasn't Gold Medalist Gordie Robertson invited to our Gold Medal game as a special guest in the first place? Here we are fawning over our present day athletes, who have yet to accomplish anything, but forgetting our former glory winners?

Olympic honour is evidently very fragile.
Posted by Caterwauler at 8:07 am 1 comments 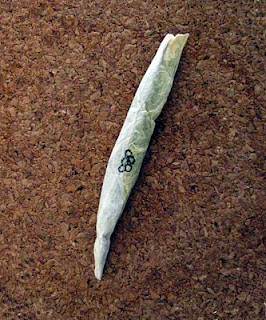 It's all about BC, Bud.
Posted by Caterwauler at 4:16 pm 5 comments

Email ThisBlogThis!Share to TwitterShare to FacebookShare to Pinterest
Links to this post
Labels: BC Bud, Olympics, Reefer Madness, torch

The other day, the Scotia Bank started an enthusiastic company endorsement of Canadian athletes, called Show Your Colours Canada.
It was kicked off by two-time Olympic gold medalist, Cassie Campbell. "What it means and feels like to be a proud Canadian is something truly unique and special for every one of us," said Ms. Campbell, Captain of Canada's National Women's Hockey Team from 2001 - 2006, and six-time World Champion gold medalist. "Show Your Colours is a 'call to action' for Canadians to show their pride and encourages them to think about how they can show the world what makes Canada a truly amazing nation - from its environment to its citizens, coast to coast."
This corporate pride and encouragement was seen by many as positive cheer toward competing Canadians.

Not VANOC.
There they were again, threatening to sue Scotia Bank for 'ambush marketing'. Saying that their actions would hurt the Olympic games.
What it seems they want is for no one to participate in their Olympics. No one to write anything about them. No one to talk about them.
No wonder the overwhelming majority of British Columbians I have talked to feel left out of the whole event when we cannot even cheer on our athletes unless it is through buying the privilege with official sponsors.
I don't know about you, but I feel a strong backlash against those 'official' sponsors.
Pride is one thing, greed is another.


addenda eye opener: read this to see how VANOC is shafting our American friends -
http://seattletimes.nwsource.com/html/olympics/2010276798_olytickets15.html
Posted by Caterwauler at 7:45 pm 5 comments

Posted by Caterwauler at 11:04 am 3 comments 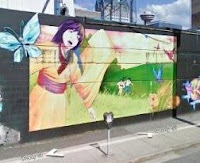 Remember this wall?
Beatty Street across from the Armories. It was filled with bright paintings, known as the Beatty Street Murals.
Colourful and vibrant on a very plain street.

But as usual, VANOC didn't want anything that tourists would see as part of Vancouver's multi-faceted identity, even though all of the original 16 paintings were commissioned by the Steve Nash Foundation, so they had them painted over with blue paint. Perhaps they were afraid of secret messages woven into that artwork by Pepsi, or Mastercard, or Telus etc. 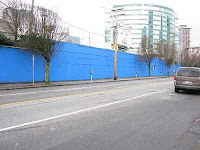 Ambush Advertising they call it in a feeble attempt to make themselves sound correct.

Just another reason for John Furlong to hang his head over the treatment of the citizens of Vancouver and their exclusion from the Winter Olympics. 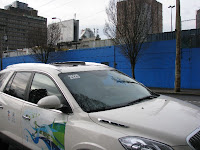 Oh, by the way, that's an official Olympic vehicle parked there on Sunday.
I assume standing guard over the blue wall in case someone dares put a happy face on it.

Whoops, someone did dare to make a rather sad statement.

These kinds of attacks on our visual environment need to be followed more closely. WHO actually hired the painters to slosh over the murals? We need to know the actual names of people who follow these directions blindly and stupidly and with no concern for their own city. SOMEONE gave the order.

And it reminds me of all those glorious tall trees that were brutally chopped down on Hamilton street by Concord Pacific to make way for the new CBC studios, none of which would have interfered in any way with the construction or look. And none of which were on Concord Pacific's property.
There IS a law that says if you cut a tree down from city property, it must be replaced by a like tree. Still waiting for that and the name of the person who gave the order.
These people who have so little regard for their own neighborhood couldn't be from Vancouver. Or even live here. Could they?

see my previous post and pictures about the CBC trees - October 2006 - CBC construction, your trees or theirs?
http://caterwauls.blogspot.com/2006_10_01_archive.html

Posted by Caterwauler at 9:09 pm 4 comments

Roxxxy the sex robot made her debut in front of adoring fans at the AVN Adult Entertainment Expo in Las Vegas.
Roxxxy is a life-size, anatomically correct, robotic girlfriend who comes complete with artificial intelligence and flesh-like synthetic skin. She stands five feet, seven inches tall, weighs 120 pounds, "has a full C cup and is ready for action," according to Douglas Hines, who was an artificial intelligence engineer at Bell Labs before starting TrueCompanion.
Not sure if that means Douglas has artificial intelligence or Roxxy has.
It says here that she is a companion, she hears you, she listens to you, (note the separate categories) All women hear you, but .... well, you know.

There's more, Roxxxy comes with five personalities. Wild Wendy is outgoing and adventurous, while Frigid Farrah is reserved and shy. Would you pay $9000. for frigid?
I am not really sure I want a personality anyhow. My vacant looking wide-eyed blow up doll, (Mazie) doesn't need any thoughts. And she seems to be saying a perpetual 'Wow!, enough for my simple ego.
And I can deflate her and have a secret companion right there with me, deep in my front pants pocket.

Inspiration for the sex robot sprang from the September 11, 2001 attacks, when planes crashed into the World Trade Center in New York City and Douglas decided to replicate his friend's personality who died in that event. ??? I am not making this up. I promise. But it does cause one to wonder about Doug's friends.
I can't figure this either, but after years of seeing those extremely beautiful Mattel Barbie Dolls I can't figure out why she was made so ... eewww ... ugly! Roxxxy is like Cro-Magnon man with a wig. A rubberized Drag Queen. I only suggest that perhaps she is intended to look like one of the 72 virgins promised to the suicide bombers on 9/11. Anything to put them off.

Well no perversions for me.
I am just going to stick to my regular Gentlemens' Club where I can go and get chained upside down to a wall naked and have Madame Merelda beat the hell out of me!
Posted by Caterwauler at 2:55 pm 1 comments

Old Adage: If the shoe fits, wear it.

Murphy's Law: When you get it home it won't fit.

Comment: Don't have a hissy fit about it.
Posted by Caterwauler at 2:31 pm 3 comments

This is what I think might happen to our stadium because of secret deals. We just now heard about a secret deal made by VANOC in April, 2009, which was to take 8.3 million dollars from a 'construction' budget ... and use it to build an Olympic flame holder inside the stadium and to make the acoustics better.
Apparently someone sold this to John Furlong on the idea that the athletes, needed to hear well in there so they would compete better out there. And one bozo (Dave Cobb) said, "We like to keep these things secret for the surprise element"! Someone needs to tell ol' Dave, that the public cannot be surprised any more by the Olympics Committee's nefarious deals.
Well, we all know how much the developers want to get their greedy hands on the BC Place property. I think they'll purposely get those construction costs up so high that Gordon Campbell will announce that he is scrapping the whole stadium deal, and is being responsible to the BC taxpayers. Therebye allowing his friends to fly in like vultures to a rotting corpse and feed.
Then it wouldn't surprise me at all, Dave, if Gordon pockets millions more in payoffs from whomever while the condos get built.
Big deals have been canceled before in the name of saving the taxpayer's money, usually after someone already got all the taxpayer's money.
Don't count on watching the Lions or Whitecaps play anywhere near BC Place unless you buy a condo there and have a big screen TV.
Got any more secrets to surprise us with, Dave?
Posted by Caterwauler at 3:24 pm 1 comments