So quit badmouthing cloning and look on the bright side. Do you really believe it’s going to stop anyway? Those laboratorys were doing it secretly in the first place, and they’re not about to curtail their erotic excitement because of world opinion or morality. They get off on it. Expect a public relations onslaught on the same scale as Why War is Good For You.
So what’s good about cloning? Lots. Everyone can have wool sweaters instead of that sticky polyester. Dolly’s legacy. Maybe your dog is getting old, can’t control himself, you take him down to Clones-R-Us and get a brand new puppy, and he IS your dog all over again!
But it’s human cloning you’re thinking about, right? Okay, imagine this if you will; two hockey teams made up of only Wayne Gretskys. What a game! How about George Foreman against George Foreman in the ring? Imagine his kids at ringside! And the Jolly Giant will smile and cook you a steak between rounds on his grill. The downside to human cloning of course is how many Britney Spears can we stand?
Hollywood will embrace cloning, they’d be able to remake all those old movies with original clones. ‘It Happened One Night’ with Clark Gable 2 and ‘High Noon’ with Gary Cooper 'A version', except someone wouldn’t be able to resist making all the bad guys Cooper too. They’ll have the technology to go back for the REAL Ben-Hur’s DNA and have the chariot race against Charlton Heston 'B'. And imagine listening to the Barbara Streisand Choir.
And you know how your kids’ll do everything for you as six-year-olds but won’t do anything at seven? You’d be able to have perpetual six-year-olds forever getting you things, the remote, a beer. The excitement never ends! Never ends ...... never ends

But wait ... it’s inevitable that we’ll clone AND genetically engineer what we need. One of them new Aardvark vacuum cleaners. Perhaps a brand new Jaguar with leather seats. I mean a brand new JAGUAR! Genetically adapted to be docile of course. Perhaps a running dog fetching a perpetual bouncing ball. Maybe a tap dancing pink elephant? Or a green blob thingy that was once a frog?
And ... er, other things we don’t really NEED but what we’ll think are fun to have. Right? It isn’t too unimaginable that we’ll OWN creatures like these ...

Little genetic clones who will run their hearts out for you ... until they die ... but they have no brains, only a program, no thoughts, only an impulse to run, or to dance for our amusement, or to plop endlessly on the floor. They have no idea what they are doing. It's all right, we'll be told .... because they have no idea. They're only 'genetically manufactured beings'. They have no feelings. They don't know anything at all.
Do we?
Look at them. Are you sad too?

1989 - The Exxon Valdez hit a reef in the Gulf of Alaska, spilling 11 million gallons of crude oil in the largest oil tanker spill in U.S. history.
Exxon, anticipating billion dollar lawsuits, raised the price of their gas at the pump to help pay the costs. Understood.
NOT understood - Shell, Chevron, Sunoco, BP, Texaco had no lawsuits ahead but raised their pump prices anyway, just for the windfall profits.

Posted by Caterwauler at 8:12 pm 2 comments

At least the folks in Las Vegas gave us fireworks before imploding their hotel with demolition charges .... 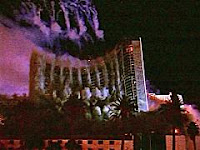 ... which is way more than Larry Silverstein gave us when he imploded his building, World Trade Center 7 .... 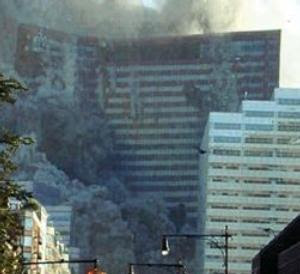 Cialis has this advertising out right now - an older couple talking in the grass. The sun is just right, the forest is fresh, their bicycles nearby, suggesting healthy fun people. It's a halcyon scene. Then they walk away into the bushes. I want to call out to them, "Hey, don't forget your bikes, this is a bad neighborhood!" But alas, they hear nothing because he has taken Cialis, the 36 hour ED drug! Maybe Cialis makes you funny?
In another scene two people are sitting in separate bathtubs on a hillside in a vineyard, overlooking the city. No water pipes going into the bathtubs. Maybe they're all tired out from bringing the water to the tubs. Maybe it got cold after all that exercise? Maybe there was terrible shrinkage? Maybe they're just kinky?
By the way, when that couple is walking through the grape vines, does he look a little bowlegged to you?
They say that Cialis can be taken on a Friday night and you're covered for the whole weekend! Wow. Then they say that the wife could say, "Honey, how about tomorrow?" and it'll still be alright. Does she have another headache? One of the side effects for men is headache and upset stomach. But men with good wood would only blurt, "To hell with the headache and I might throw up but look what I've got here!"
36 HOURS! The Cialis people say that provides a window of opportunity. I say stay away from windows or you might have the cops at your door! 36 whole hours. But wait, then they tell you to call your doctor if you have an erection lasting more than four hours! Isn't that kind of contradictory? Most old guys wouldn't call anyone at all, they'd be happy just to proudly stare at it for 36 hours! Maybe see how many coats they could hang on it?
Okay, so if your wife has a headache and you're standing at attention for hours on end, you might not want to phone your doctor, just give her sister a call. That oughta be exciting.
Posted by Caterwauler at 7:35 am 4 comments

The UN, closely following what the Americans believe is a "War on Drugs", has told Canada we are breaking international drug laws by allowing a safe injection site in Vancouver. Our federal government has suspended financial help of the site.
Considering that the USA and the United Nations have been an abysmal utter failure on fighting drug use we should tell them to go and do something useful, but mind their own business!
Poppy production in Afghanistan (read heroin production) is up 25%, the largest in years in a country where they keep telling us we are saving the poor Afghans and have everything under control!
HIV AIDS is now at epidemic proportions worldwide!
C'mon Harper, have some independent guts and tell the Americans and the United Nations to carry on doing nothing useful!
At least here in BC we are trying SOMETHING.
If only we had the guts to make it a 20 year MANDATORY sentence for dealing hard drugs.

Back to Top
Posted by Caterwauler at 8:19 am 4 comments