Singer Harry is about to begin recording his first Christmas album. There are some decorations evident. In the Control Room are the Musical Director KEVIN, his Personal Assistant GIRL, and the ENGINEER. They are watching through the glass as Singer HARRY dons a head-set in his sound booth. We hear the pre-recorded orchestral intro music. The song is Mistletoe and Holly.

SINGER HARRY (singing)
Oh by gosh by golly, it's time for Mister Toe and holly, tasty ...

SINGER HARRY   (looks oddly at them)
Sure, Kevin.

The Engineer starts the music again.

SINGER HARRY
Oh by gosh by golly, it's time for Mister Toe and ...

SINGER HARRY
What?   What's going on?

SINGER HARRY (puzzled, looks through glass at the others)
Did what again?

SINGER HARRY  (after a pause, still staring)
Yeah, so?

M.D. KEVIN
Harry, you're saying Mister Toe instead of Mistletoe.

SINGER HARRY
I am saying - Oh by gosh by jolly, it's time for Mister Toe and holly.

M.D. KEVIN
Now you said by gosh by JOLLY! It is mistletoe not MISTER TOE,  and golly not jolly.

M.D.KEVEN (exasperated)
No, they're not Harry, it is mistletoe, what you do at Christmas. Under the mistletoe, get it?

SINGER HARRY
We never had mistletoe since Mom and Neighbour Bill that time.

SINGER HARRY
Kevin, my uncle sang that song to me when I was four, and every year since. I know the song.

P.A. GIRL  (whisper to Kevin)
I think he thinks those ARE the words.

M.D. KEVIN (tapping his mic)
Harry, your uncle was kidding you.

ENGINEER
How could he sing it all this time without knowing? It's the name of the song.

SINGER HARRY  (a bit defensive)
Have you got the lyrics there?

P.A. GIRL
I didn't bring the song sheet. He said he knew it all his life.

ENGINEER  (now covering his mic)
Do we have to prove it to him?

The Engineer starts the music intro again. Singer Harry ignores it, taking off his headset.

SINGER HARRY
But I've always sang it like that.

M.D. KEVIN
How could you? Didn't you ever wonder what Mister Toe meant?

Singer Harry thinks a bit, but just stares through the glass at Musical Director Kevin.

That is too much for Engineer and he tries to hide his laughter.

M.D. KEVIN
Harry, there is no Mister-freakin'-Toe in the song! Can we just do this?

P.A. GIRL
I can go and find the lyric sheet.

ENGINEER
I could use the overtime.

M.D. KEVIN
I KNOW it says mistletoe. And it is golly not jolly. oh my gosh my GOLLY, not jolly. I mean BY gosh BY golly. Egad, you're making me crazy.

M.D. KEVIN
Harry, we're not rewriting a new song. This one is an OLD song. Sinatra was a co-writer of it. Can you just do it with mistletoe and forget whoever the hell Mister Toe is?

SINGER HARRY
Hey, I'm easy, you got it.

The Engineer re-cues the intro and it starts. They all stare through the glass with trepidation at Singer Harry as he re-positions his head phones but needs to readjust and Engineer starts the intro yet once again. Singer Harry ends up holding just one earpiece to his ear.

SINGER HARRY  (singing again)
Oh my gosh by golly, it's time for ... mistletoe and holly, poolside tables, Betty's Grables, peasants under the snow .....

The Engineer looks at Musical Director Kevin, throws up his arms in frustration but leaves it go.  P.A. Girl is wide-eyed with disbelief.

SINGER HARRY
Oh my gosh you tinkles,  Grammaw's got new wrinkles, Mother's drinking, Father's stinking, and no one knows where to go .....

The Engineer slowly turns down the volume in the control room.

The Engineer fades the music to the control room out. Musical Director Kevin turns away and thumbs through a notebook.

M.D. KEVIN
We paid for the orchestra. They said it would be easy.

P.A. Girl is strengthening her mascara while blowing bubble gum. Engineer takes a comic book from under his console, then a rolled cigarette from behind his ear and sniffs it. Musical Director Kevin just hangs his head.

We watch Harry in the booth, there is no audio now and he is not heard but we see he is totally oblivious while singing his heart out!

ANGLE ON:
We pan back to the console room, there is no one there. 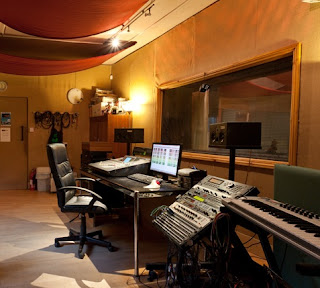 Posted by Caterwauler at 8:27 am 0 comments