Oil industry giant Exxon Mobil Corporation exceeded their own expectations today by announcing that its third-quarter earnings shot up to $10.5 billion - the second-largest quarterly profit ever recorded by a publicly traded U.S. company.
Did you read that right? TEN AND A HALF BILLION! Dollars. US.
And they said all summer that they weren't price gouging at the pump!

pps: Hope our greedy Canadian banks don't see this.
Posted by Caterwauler at 9:10 am 1 comments

Someone called Liberal Belinda Stronach a dog? Conservative Peter MacKay says it wasn't him. Someone taped a voice in parliament talking about a dog. Or was it a talking dog? Belinda says Peter should apologize. Peter barked, "No, it's over." Hockey Pit Bull Tie Domie wasn't commenting. Mrs. Domie said she knew where there was a bitch in heat.
The Canadian Kennel Club wants clarification on the breed.
Arf!
Posted by Caterwauler at 6:21 pm 2 comments

BC Ferries - Queen of the North

Check out our blog entry of May 26, 2006, 'BC Ferries Scenario'. Seems we weren't that far off.
Use Technorati search on this page.
Posted by Caterwauler at 9:04 am 2 comments

There is a lesson in Garth Turner being thrown out of the caucus of the Conservatives. Something you need to consider as a voter come the next federal election in Canada: The fact that no matter what a member of ANY political party promises his individual constituants, he won't be able to deliver anything but what his bosses have planned.

He can say, "I will do this for you. I will do that for you." But we should know that he has absolutely NO say in what he can deliver for your vote.
It seems that Turner is gone simply because he blogs things about his own party and what he thinks they are doing. Honesty and public information seems to be a no no. Has been for a long time.
Chretien controlled everything in the Liberal party from his office, down to what a Liberal answered when someone said hello. The Conservatives are simply more of the same.
Ever felt more powerless?
Me either.

So far in the Iraq war, 118 journalists and reporters have been killed.
Most recently British journalist Terry Lloyd, a reporter for the ITN network, as well as Lebanese interpreter Hussein Osman and French cameraman Fred Nerac who were unlawfully killed by US army in Iraq on March 22 2003, a British coroner has ruled. Their clearly marked news vehicle fired on by US tanks. After being caught in a cross fire between the US Army and Iraqi forces. Wait a minute, aren't the Iraqis supposed to be on the US side anyway?

One could almost see something going on here. Like how many of these dead reporters were 'embedded' with US troops? We all know that embedded reporters don't really report what is happening in recent wars, they only report what they see when they are allowed to see anything at all. And even then, would an embedded reporter tell the world what was going on if it went against those he was travelling with?
Reporters Without Borders releases reports periodically about such things, it would be interesting to see who was embedded and who was not.

The coroner told the inquest: “In my view I have no doubt that the minibus presented no threat to the American forces as, firstly, it was a civilian vehicle, and secondly it stopped and turned around to pick up survivors and was facing away from the American forces. It was obvious that wounded persons were getting into the vehicle. If the vehicle was perceived as a threat then it would have been fired on before it did a U-turn. This would have resulted in damage to the front. There is no such damage.

The IFJ, the world's largest journalists' group, has organised a global campaign over the mystery surrounding a number of media deaths, starting with the United States military attack on the Palestine Hotel, a media centre, in Baghdad on April 8th 2003 in which two journalists died. On the same day the US attacked the Baghdad office of Al Jazeera, killing a reporter. Last year a court in Spain which had issued an arrest warrant for three American soldiers over the killing of cameraman Jose Couso in the Palestine Hotel had to abandon the case because of non-co-operation by the United States authorities. The IFJ has accused the United States of "callous indifference" over media killings, criticising its failure to produce credible reports, always exonerating its own personnel whenever they are involved and refusing to respond to appeals for independent and inclusive investigations.
"So long as the United States remains indifferent and refuses to explain the actions of its soldiers in these killings there will be speculation about deliberate targeting of media staff," said White.

ITN's editor in chief David Mannion said: "I would also like to say something that I know Terry would have wished me to say. "Independent, unilateral reporting, free from official strictures, is crucial; not simply to us as journalists but to the role we play in a free and democratic society."

Yep, there's something going on here.

Posted by Caterwauler at 4:25 pm 0 comments

There's new evidence that marijuana smoking prevents Alzheimer's disease. THC, the main ingredient in pot, blocked the formation of Alzheimer's plaque in sufferers' brains better than current Alzheimer's drugs in a study in California.
Kim Janda, director of the Worm Institute of Research and Medicine, said the findings offer 'evidence that THC possesses remarkable inhibitory qualities.'
Janda said the study found that THC blocks the enzyme acetylcholinesterase, which hastens the formation of plaque in the brains of people with Alzheimer's disease.
Not to mention the costs, about $200. for a pharmacuetical pill, about $5. a joint for the 'natural' cure. Alzheimer's affects over 4.5 million people in the US.
So now there is hope for old aunt Mary Jane to enjoy her remaining years playing canasta in a roach induced bliss instead of the frightening fog of dementia. Besides, her friends might think she's cool.
And there is no truth to the rumour that the Worm Institute is in Janda's Mom's basement.
So the head-to-head is this:

Pharmacueticals = Doctors knowing your business - Pharmacists condescendingly counting out your pills - Personal information going to USA through American companies handling your medical records - remembering where your pills are - huge costs - hoping no one will know - having to write your name on your bathroom mirror.

Marijuana = Available on any street corner - no records - who needs to look for pills? - great THC content in BC Bud - cheap - who cares who knows? - fun to watch Merry-Go-Rounds.

Advantage - Mary Jane.
Cue up the Stones new CD for Grandma.
Posted by Caterwauler at 9:22 am 1 comments

CBC construction, your trees or theirs? 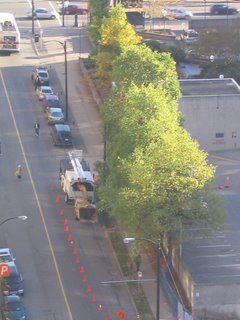 There is always a huge uproar when someone cuts down old trees in Vancouver. I think there's even a bylaw now to stop you from doing it. Even on your own property.
However, it seems CBC can do it with impunity. A few weeks ago they chopped down several old pines, on the very edge of their property. They are building two new high rise condo buildings where the parking lot was.
Now they are planning to build a new studio facing Hamilton street, where the plaza is now.
Today crews arrived and demolished several more beautiful old trees bordering their site. They went into a chipper and were gone in less than an hour.
These trees looked like they were on CITY property. Check out the pics. 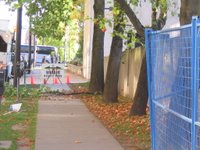 Did those trees belong to CBC or YOU?

Judging by the construcion plan of their new studio, they would have been well off the area of construction. Why couldn't they have 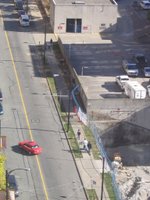 worked around them or why couldn't the architect plan for them in the design? Maybe he's somewhere in Toronto and like the previous blog item about Sears building, has no idea what Vancouver looks like.

Our lives are a little poorer because of lazy designers.
Posted by Caterwauler at 9:54 am 3 comments 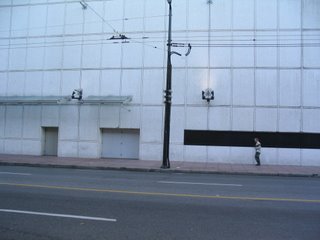 Back to Top
Posted by Caterwauler at 9:49 am 5 comments