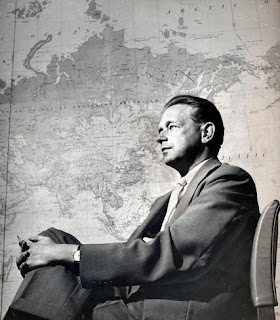 Sweden's Dag Hjalmar Agne Carl Hammarskjöld was Secretary-General of the United Nations from 10 April 1953 until 18 September 1961 when he met his death in a plane accident while on a peace mission in the Congo. An accident.
In 1960, when President Joseph Kasa-Vubu and Prime Minister Patrice Lumumba of the Republic of the Congo sent a cable on 12 July asking "urgent dispatch" of United Nations military assistance to the Congo, Secretary-General Hammarskjöld addressed the Security Council at a night meeting on 13 July and asked the Council to act "with utmost speed" on the request. Following Security Council actions the United Nations Force in the Congo was established and the Secretary-General himself made four trips to the Congo in connection with the United Nations operations there. The first two trips to the Congo were made in July and August 1960 and January 1961. The fourth trip to the Congo began on 12 September 1961 and terminated with the fatal plane accident.
Natural resources of the Congo: petroleum, timber, potash, lead, zinc, uranium, copper, phosphates, natural gas, hydropower.
Patrice Lumumba helped found the Mouvement National Congolais (MNC) in 1958. Lumumba and the MNC formed the first government on June 23, 1960, with Lumumba as Prime Minister.
Upon independence in 1960, the former French region of Middle Congo became the Republic of the Congo and began an flirtation with Marxism.
Hammarskjöld’s most dangerous problem of the newly liberated Congo, arose in July, 1960, when the new government, faced with mutiny in its army, secession of its province of Katanga, under Moise Tshombe, and intervention of Belgian troops, asked the United Nations for help. The UN responded by sending a peace-keeping force, with Hammarskjöld in charge of operations.
Despite the arrival of UN troops, unrest continued as the USA had interest to see the Belgians remain in the country and Patrice Lamumba sought Soviet aid. But in September Lumumba was dismissed from the government by Kasavubu, an act of dubious legality. On September 14 a coup d'état headed by Colonel Joseph Mobutu (later Mobutu Sese Seko) and supported by Kasavubu gained power. Lumumba was captured in Port Francqui on December 1, 1960 by troops of Mobutu, arrested and flown to Leopoldville in handcuffs. Mobutu said Lumumba would be tried for inciting the army to rebellion and other crimes.
United Nations Secretary General Dag Hammarskjöld made an appeal to Kasavubu asking that Lumumba be treated according to due process of law. The USSR denounced Hammarskjöld and the Western Powers as responsible for Lumumba's arrest and demanded his release.
When the situation deteriorated during the year that followed, Hammarskjöld had to deal with almost insuperable difficulties in the Congo and with criticism in the UN. The last crisis for him came in September, 1961, when, arriving in Leopoldville to discuss details of UN aid with the Congolese government, he learned that fighting had erupted between Katanga troops and the noncombatant forces of the UN.
Sometime in the night of September 17-18, Dag Hammarskjöld and fifteen others aboard perished when their plane crashed close to Ndola airport, near the border between Katanga and North Rhodesia. The details of the crash are still unknown.
A plane crash was an easy thing to engineer and accomplish in those days of naivity among Western nations. The Soviet bloc was after uranium. The USA was trying to keep them away from a source of supply. Hammarskjöld was working toward a democratic republic for the Congo and became a stumbling block for Soviet domination of the resource rich region, especially that all important uranium.

The quarter century of experimentation with Marxism was abandoned in 1990 and a democratically elected government was installed in 1992. The Republic of Congo is one of Africa's largest petroleum producers with significant potential for offshore development.

In July 2002, documents released by the United States government revealed that the CIA had played a role in Lumumba's assassination, aiding his opponents with money and political support, and – in the case of Mobutu – with weapons and military training. Did the USA actually supply Katanga troops with weapons with which to fight against the UN peace keeping forces?

The former USSR has never released any documents saying they or the KGB engineered Dag Hammarskjöld’s plane crash. Perhaps they’re buried somewhere within the permafrost depths of the Kremlin or Patrice Lumumba University in Moscow?
The Cold War was not always cold.
Posted by Caterwauler at 10:07 am

It is not whether I was exactly right, it is that I questioned the narrative provided by the powers-that-be at the time. Don't laugh off conspiracy theorists, they are thinking in tune with the world.

The universe is NOT unfolding as it should.

Posted by Caterwauler at 4:28 pm 0 comments