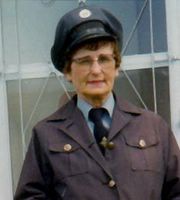 Vilma was born Vilma Jensine Dahl in Bodø, Norway, April 21, 1911. After the death of her mother she was separated from her twin sister and at 9 years old she came to Canada with her uncle and beloved aunt, Jette Andersen.
She established her life in Vancouver, attended Strathcona, General Wolfe and John Oliver High Schools. An artist and songwriter and she had several poems published. Vilma married John Westerholm in 1930. She drove a truck during WW II and joined the BC Electric company as a street car conductor in 1944. Vilma became the first female trolley bus driver in BC and was assigned the first regular route, leading the way for other women to follow her success at BC Hydro. Many Vancouverites will remember her ever present camera and her cheerful attitude while piloting the huge electric bus on the Stanley Park run for years.
Vilma was known as loving, loyal, a valued friend and a fiercely independent woman. She embodied the Norwegian spirit of tackling anything and loved Vancouver. She was also recognized as a Vancouver Pioneer. After a 70 year search Vilma was finally reunited with her sister, Olga, in Bodø, Norway in 1987, escorted there by her grandson, Christopher. Vilma enjoyed good health and a lengthy retirement, driving her own car well into her 80s.

Remembered fondly by many including her sons, Robert and Albert, daughter Jane, grandchildren Chris, Tracy and Sonny, and great grandchildren Jesse, Jordan, Conner and Sarah.

If there’s a bus going to Heaven, Vilma will be driving it.
Posted by Caterwauler at 4:04 pm