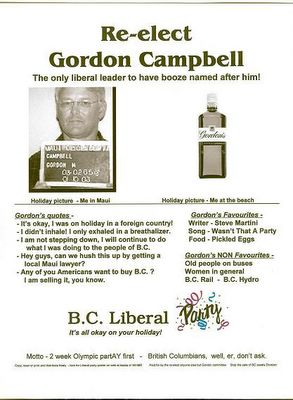 This is a poster. Hard to read here but it says - Re-elect Gordon Campbell,
the only liberal leader to have a booze named after him.
The other picture is of Gordon's Gin. The captions under Gordon's pic are - Holiday picture - Me in Maui - - - under the gin bottle pic - Holiday picture - Me at the beach.
Among the comments are - "I am not stepping down, I will continue to do what I was doing to the people of BC." and - "Any Americans want to buy BC, I am selling it you know."
Gordon's favorites = writer - Steve Martini - song - Wasn't that a Party - food - pickled eggs.
Gordon's NON favorites = Old people on busses - BC Rail, BC Hydro and women in general.
On the very bottom it states - Paid for by the 'Elect anyone but Gordon Campbell committee'.
(find the poster on Kazaa or WinMX)
Posted by Caterwauler at 11:40 pm