News that al-Qaeda planned to kidnap actor Russell Crowe. The FBI warned him about the plot and protected him. What?
The al-Qaeda idea was apparantly about taking iconographic Americans out of the picture as sort of a cultural destabilisation plot. I thought Russell was an Australian?

Well he was born a Kiwi and went to Oz at 4. Doesn't the naive al-Qaeda know these Auzzies are tough? They grow up with dingos, crocodiles, Great White sharks, asps and funnel web spiders and STILL wander around the outback in bare feet and swim everywhere! Not to mention that Russell can be a surly bastard when aroused. You don't get between an Auzzie and his Fosters! And besides, one has to wonder what culteral destabilization would result in removing Russell anyway? Sounds less like Osama Bin Laden and more like Idi Amin! You just don't want to kidnap Russell Crowe!
I can just see Russell as the kidnapee, saying "G'dai Mite," while tearing off their heads and chewing their ears! Hmm, there's a movie in here somewhere.
Meanwhile, Russell only said, "Who is this Al guy anyway?" 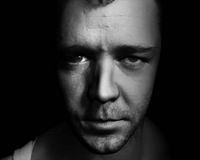 Russell in a GOOD mood.