Sure some of those UFO people are Trekkies, wishing to get beamed up. Others are google-eyed and so desperate to see anything up there that they DO see something up there. Others are wearing tin hats and tuning in the universe. Then there are the rest of us, open to anything and just observing whatever might be there.
In March, 1997, I was at a summer home, watching the skies at about 11:00 pm. There are hundreds of satelites going by on any given night and anyone can see them twinkling up there. I was looking southwest, toward the constellation Cassiopeia. There are 5 main stars, but as I looked at it, 3 'stars' that seemed to be part of it began moving east. These lights were in a triangular formation and moved fairly slowly across the sky, eventually disappearing in the constellation Ursa Major, the Big Dipper. These were not satellites as they don't glide by in formation. I even called a NASA office in Seattle and they had no explanation, but confirming that no 3 satellites would move in unison. I learned later that many people around the world had seen this formation of lights and believed it to be a huge craft, including many in Belgium and Moscow.
Then in 2002, summer, I was driving into Vancouver on the #1 highway through Burnaby at 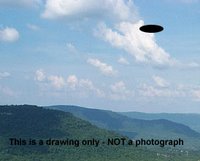 about 2:00 in the afternoon and near Central park, we observed a black oval shaped object in the sky ahead, not so much of an object as a shape in the sky. It was slightly east of Central Park and it appeared to be several thousand feet up.
I can only describe it as though it was a pipe in the sky with a black hole in it and yet one couldn't see the 'pipe', only the dark entrance. This did not move or vary as we drove along the highway. At Willingdon Ave, we pulled off the highway and looked up. There were other cars doing the same thing, I'd say about 25 of them, including an RCMP cruiser and the two constables were also out of their car looking up. It was definitely NOT a balloon or kite or aircraft. It stayed perfectly still the whole time we watched it. About a month later I met a woman who had also seen it from another area, she was going the opposite way with her teenaged son.
If you do see something, there is now a place to report it. The owner of the website, Brian Vike, is simply a regular guy who wants to be alerted when people observe strange objects in our skies, and he is providing the space to do it.
http://www.hbccufo.org/index.php

Check it out, you might be amazed at how much activity is going on around BC. And you might be interested if something has been sighted in your area. This IS the greatest place in our world to live, perhaps other beings are realizing it too.
Posted by Caterwauler at 4:46 pm