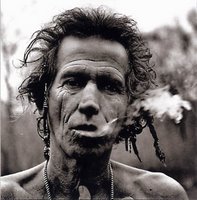 Keith Richards is going to get his skull drilled into to relieve a potential blood clot in his brain. He recently fell out of a coconut tree. He also fell off a ladder once at his home while reaching for a book in his library! One might think he fell out of his baby carriage too.

We can only wonder what would have happened if Keith had had his brain drilled 30 years ago?
Would he be a ukelele playing Salvation Army Major today? A Clockwork Orange transformation?
Would he?
.... Nah ....

In a later follow up report, responding to newspaper speculations, it was said that Keith did NOT need a second operation and that no brain damage had been done.
Would we know?