Astronomers - be fair, be fun 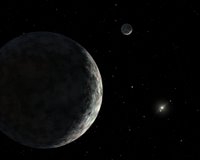 As International Astronomers meet to redefine our planets this week, some are worried about the status of our tenth planet.
Officially designated 2003 UB313, it was originally discovered in October, 2003 by Caltech's Michael Brown, Chad Trujillo from the Gemini Observatory in Hawaii, and David Rabinowitz from Yale University.
They are also deciding if Pluto is to remain classified as a planet. Recent addition 2003ub313, now more affectionately named Xena, is slightly larger than Pluto. Xena's sidekick moon has been dubbed Gabrielle.
If Pluto stays in, then Xena must be included. The scientists are thinking that Pluto's satellite moon, Charon, might also be classified as a planet, even though it is small enough to be a 'Pluton'.

Well we need fairness in your decision, Messrs Astronomers, and a little lightness and fun in our immediate galaxy. If Pluto stays in, and Charon adds in, then Xena and Gabrielle MUST stay in.

There are thousands of amateur skywatchers here on Earth, peering into the glinting blackness above, who couldn't bear to have Xena and Gabrielle parted again. A single orbit takes those two worlds 560 earth-years! It's not about mimicking a tv show, it's about imagination and putting a little fantasy into science to make it more interesting and perhaps enticing to casual observers.

I, for one, would feel better if the names become official and knowing that Xena, the Warrior Princess and Gabrielle, her loyal companion are out there together .... forever.

Posted by Caterwauler at 8:12 am