Fred Willard went to an adult movie theater. Someone must have followed him there and somehow the police were called and Fred was arrested for lewd conduct. Are these the same people who followed Pee Wee Herman into his theater?  I believe that was the charge against Pee Wee too.
Both of these men lost their jobs and had a tremendous crash to their careers. 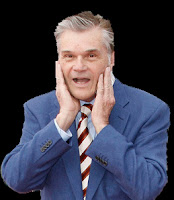 Fred Willard is now 76. Viagra pills cost about $15 each. Admission to these theaters (for seniors) is about $7. There is no sense taking a Viagra if you have no one to share the results with.
What about Pee Wee? Did the poor little man ever proposition a hooker without being laughed at? Did she turn him down because she didn't have her pigtails on? Where was he supposed to go? And what kind of reporter follows Pee Wee around until he slips into a Triple X theater? Is Fred Willard a target for TMZ? If he really is he should be proud of it and hold a press conference! Maybe cry and apologize for the behavior of the reporter and demonstrate a dramatic ability. His career might take off in a completely new direction.
Was Charlie Sheen lewd? Nope, they couldn't get him because he admitted it all and the girls liked him! Charlie USED the people from TMZ to further his career!

What exactly IS lewd? I'll tell you what lewd is;
Lewd is the CEO of BP defying the US President while destroying the Gulf fishery.
Lewd is Dick Cheney over-riding the US Constitution while shooting a guy in the face.
Lewd is George Bush lying about WMDs in order start a vengeance war.
Lewd is Michele Bachmann maligning a whole people for Repugnican brownie points.
Lewd is Rush Limbaugh making fun of Michael J Fox's debilitating disease.
Lewd is serial child molester Jerry Sandusky and the whole board of Penn State.
Lewd is the unnamed executives behind the Freddie Mac and Fannie Mae scandals.
Lewd are the paparazzi who hound people day and night for an uncomplimentary photo.
Lewd is the mainstream media for ignoring LIBOR scandals in favor of Jennifer Aniston.

Lewd is much bigger than following a fading celebrity into a darkened movie house.

Willard is a veteran comedic actor who has appeared in more than 200 films. He most often portrays characters who seem daft or absent-minded but are nonetheless likeable. Pee Wee seemed to be a naive spacey character who was harmless to all. They've said Fred will be offered a diversion course and will be allowed to enroll in counseling to resolve a lewd conduct arrest that cost the actor his job on a public television program. The police have to do their job, but why not arrest everyone else in that theater too? It was in L.A. surely someone got shot somewhere that day. I would suggest the people on my above lewd list need counseling a lot more than Fred.

We know the targets to come, John Travolta seems to be one. They're itching to get him. And Tom Cruise for sure, but he's pretty smart, that mission might be impossible. They got George Michael but it didn't seem to take, he just went and did a concert with Elton John. They're watching George Clooney pretty carefully too, far too handsome and successful. And a little dangerous if they're not careful. Anderson Cooper took himself out of a controversy by coming out. And the society gossip media seems to be tired of catching congressmen and senators in airport stalls. Not lurid enough, their wives always stick by them for the shopping and the men are just too pathetic. Didn't these people get it with Bill Clinton? No one cared!

It's not like the olden days, is it? When the Hollywood media protected Rock Hudson, Johnny Mathis and Tab Hunter. Today it's about trying to destroy people. But I'm asking, what's the point? Don't all these famous people have a right to privacy sometime too? A moment alone without scrutiny? A holiday retreat in private? A quiet movie?
Maybe not, as long as supermarkets exist with magazine racks at the check-out full of vicarious thrills it'll never end. Too bad.

Maybe Fred and Pee Wee could put together a new act. Take it on the road. We've had the Vagina Monologues, why can't we have the Penile Duologues? Maybe reinvigorate PeeWee's Playhouse with Fernwood Tonight and call it Good Wood with your PeeWee Tonight? Or make them both spies wearing shades and trench-coats in a flashy TV show called Secret Servicing? Or something dark, like Ingmar Bergman cinema, call it The Five Fingers. Can you see Fred as a Swede, saying, "Jah, und der barometer vas fallink und I vas standing oonder it." With PeeWee as a Peter Lorre caricature.

As for me, well, I am a wannabe actor too. I need that embarrassing shot and the pulpy publicity. I'm going to hang outside of an adult movie house and smile at the cars going by like those free car wash girls. Somebody might notice me. I promise to drop my pants too, should it be boxers or briefs? I tried leaving my fly open but a hooker just walked over, zipped it up, smacked me and warned I'd get arrested for insufficient exposure. 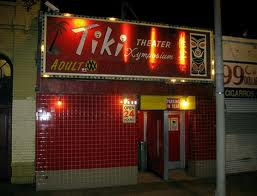 Damn. Just when you want something you can't get it. The photographer told me to get outa the picture as he was taking this one.

But I'll be back tomorrow. After I call TMZ to tell 'em where I am.

Say anything you want about me but spell my name right. Okay?

Posted by Caterwauler at 6:42 pm