Our peregrine is back

We live in downtown Vancouver. We used to face south looking toward False Creek. One day we noticed a Peregrine Falcon using another highrise building as a hunting vantage point and we began watching him for hours. Almost every day. Sometimes striking off the ledge and disappearing in a flash of wings, at other times returning with a pigeon meal. And he'd stay on the ledge to dine. He wasn't nesting up there but possibly somewhere close by. One time we even saw two of them on the same rooftop ledge, but only that once.
Then a construction of three new highrises at Hamilton and Smythe and our peregrine disappeared.

We moved within the building and now faced south, looking out toward Burrard Inlet from near 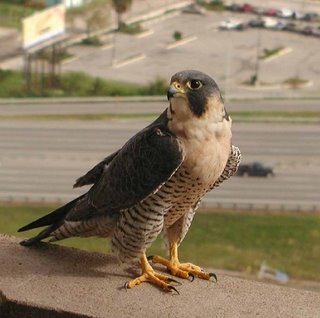 Robson Street. The other day I saw something soaring just over the top of the Vancouver Library building offices. Thinking a young Eagle without the white plumage. No, not large enough. Perhaps a Red-Tailed Hawk. I have seen one passing unhurriedly through the city in overlapping circles. No, the tail was too long and no red. Peregrines don't often soar. I have even seen a couple of black Turkey Vultures visiting from Grouse or Seymour mountain or Simon Fraser, casually checking out the city. And occassionally a Raven braves the ire of crows to get where he's going.
The bird suddenly folded his wings and dropped quickly but quit after a second or two. I knew he was 'our' falcon right away. His prey had taken cover.

I followed his flight with binoculars and he took a high position on the red S of the Scotia bank building. Spent time preening, then peering at whatever far below. Then he was gone.
I was thrilled to see him again. If he's the same one. Or she.
So look upward once in a while and you might catch a glimpse of one of the most magnificent birds to ever grace a sky. Right here in downtown Vancouver. If you do, watch him for a while, even be late getting back to work. Some things are worth it.
Amazing.
Posted by Caterwauler at 9:21 pm