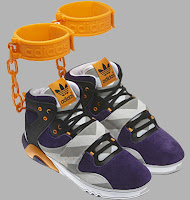 Adidas has recently gotten into trouble because of a new shoe design by eccentric fashion designer Jeremy Scott in purple suede that feature orange plastic leg cuffs. The shoes come with a set of plastic shackles. A tag line on Adidas Facebook pages reads, "Got a sneaker game so hot you lock your kicks to your ankles." They have been criticized as causing painful images of slavery or bondage and even labeled 'fascist' by some.
Many see them as BDSM shoes, and we know there is a huge market for chains, leather and latex, and dog collars. I'm not so sure they can be called fascist though. I relate fascist to brown shirts and black shirts and high salutes, but not orange and purple running shoes. I think of that piggy Nazi guy in the black leather trench-coat in Raiders of the Lost Ark. Perhaps the word was just misheard. Maybe someone commented that those runners must be the fastest. Don't ask me how they got from fastest to fascist.

Some have taken to social media to lament the design; "Any designer that's nostalgic for slavery will never have my support." and "Our ancestors fought blood sweat and tears just so fools can turn pain into an accessory?" Well, one could just stop running, couldn't one? And how dare they use Winston Churchill's famous line of Blood Sweat and Tears in reference to jogging! Perhaps Adidas will bounce back with a quote from one of Shakespeare's better stage directions; EXIT: pursued by bear. That would be fear of pain that get's you going. 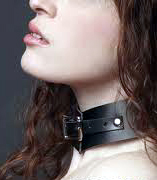 With the summer Olympics coming soon, one would naturally expect to see Adidas featuring their shoes in competition. The nature of the competition remains to be seen though. I know that if I was wearing those orange chain shoes, and that piggy guy was after me, it would be Gold Medal or nothing.

Anyway, what man wouldn't want to be chained naked upside down on a wall and have Xena beat the hell out of him? But leave the shoes on please. She did wear her leathers well though, didn't she? 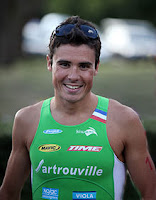 Maybe Adidas three stripes will become lash welts in the future? Will Nike come out with a Wisteria Whippy shoe equipped with leg flagellaters trailing from the whoosh? Will Asics have Pink Lavender pinpricks to spur you on? Is that a barbed wire cross on their side? Who knows where sport is headed. Maybe they'll catch on with fashion conscious Olympians. And Spain's hope for the triathlon, Fransisco Javier Gomez Noya, would look pretty cool in anything, yes? What if he carried a flail instead of a shotput?

Maybe Adidas has a good thing going with their new sport shoes. Should they go co-ed though? BDSM seems to be. Why have all those guys and gals running around separately? Call it the Olympic Scramble. Throw them all in together with the chain shoes on and see who gets whipped. Would any serious runner ever use them? They were never intended to be serious, they are little more than an outrageous fashion statement, worn by those who love bling as the thing. To be viewed by a smile not scorn. But wouldn't it actually be fun if world record holder Usain Bolt wore them in the 100 meter sprint in London and won gold again?