Police chief Jim Chu says maybe we weren't quite prepared but it's not his fault. Mayor Robertson says it's not his fault. Madam Premier Clark says we'll get them and then goes into hiding.  Blame the Canucks for losing! Blame the police for not controlling the situation. Blame Transit for allowing people into Vancouver! Blame anyone else. 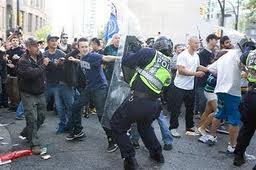 Whatever they do, while we wait for whatever consequences are going to happen. We still see those violent images of the event in progress.  Fires, fights, looting, cars afire, fires in buidings, cars tipped over, window smashing, robbing, brazen youth taunting, even fighting with police, drunks drunks drunks etc etc etc.

This is what I see which leads to my solution - - -
I watched on TV as lines of policemen with helmets and face shields, Billy clubs and plexiglass body shields stood in their line and only watched as rowdy youth threw beer cans, junk, sticks and stones and even wooden pallets at them. Occassionally a policeman would lash out with his Billy club and swipe at the THIGHS of the attacker.
How nice of our police to be so gentle with rioters.

I thought at the time that if I was a policeman in that line, I would only last ONE riot and probably be fired. I wanted to see the police go right after the taunter, smack him with the Billy club IN THE HEAD! Send him down and out, full of blood, and then cuff him right there, legs and hands. Throw him in jail and conveniently forget about him for say, 96 hours. I KNOW they cannot legally do that. So bite me! You cannot legally riot either!

Did you know what Krazy Glue was invented for in Japan? The Japanese police would collar a rioter, put the glue on both palms, pull him around a lamp pole, slap his hands together and leave him there, to be picked up later! Now that is action.

Yes, I am aware of the lawsuit idea against the police. In many cases sponsored by an indignant daddy's money! Not MY son, they say! But if the people who are charged take months to come to court, then let the perps who think they're mistreated sue us and then WE make sure THOSE cases go on the back burner for years. Decades.

If the police are going to stand and take it, then they will suffer the results, which translates to the law abiding people of Vancouver. A riot situation is serious and requires extreme action with dire consequences. Jim Chu said they couldn't act because innocent people were standing around watching? What? Would they do that in Bagdad or Kabul? If you are innocent get the hell out of there or face the results!

I do believe that while I watched our Gentlemen Police Force in action (if action is the correct word) others with an interest in the potential 'fun' of rioting watched also, saw the feeble efforts of our police and decided to go with the flow. And those images are having a lasting effect that you CAN riot and nothing much will happen.

Too bad it is coming true, but Gentleman Jim Chu, needs to put his job on the line and become Genghis Jim Chu.
No fighting, no burning, no taunting, no shit or you get what's coming to you.

It is sad to say, but yes, add this to the gang killings on our streets every month,  and Vancouver is becoming a lawless city.