Miss America tested positive for cocaine. She has been carousing in New York City's bars and drinking martinis before she turned 21. She was caught doing a glue-faced tongue kiss in public with Miss Teen America, the other All-American party girl. Miss Teen America is a spokesperson for MADD! 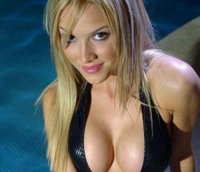 Donald Trump is the co-owner of the Miss America pageant. Mr. Trump went into a meeting with the perfectly round-breasted Ms. Conner this morning expecting to terminate her reign as Miss USA.
But he said the meeting showed him someone with “a good heart” who had been caught up in a “whirlwind” in New York. Evidently he couldn't say, "Miss America, you're fired!"
The Donald's hair was not mussed.

Monica Lewinski or Bill Clinton couldn't be reached for comment.
Posted by Caterwauler at 10:55 am