Oops, the NEB forgot something.

The Supreme Court shut down the construction of the Trans-mountain pipeline from Alberta to BC. Rebuking the NEB's (National Energy Board) decision. For now. There are some things to consider if anyone needed further info on the dangers if it was to go ahead.


Remember the Exxon Valdez spill in Prince William Sound in 1989? What's going on up there in remote Alaska now? 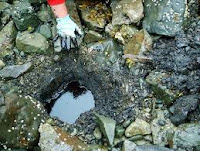 In 2001, researchers at the Auke Bay Laboratories dug over 9,000 pits, at 91 sites, over a 95-day field season. Over half the sites were contaminated with Exxon Valdez oil. Oil was found at different levels of intensity from light sheening, to oil droplets, to heavy oil where the pit would literally fill with oil.

Killer whales are individually identifiable and fortunately in Prince William Sound they were photographed starting in 1984, five years prior to the spill. Two groups of killer whales were photographed in slicks of oil in the weeks following the spill. These two groups lost approximately 40% of their numbers by 1990, and an additional five whales after 1990. Their numbers had diminished by 40%. In some pods, there appears to be no hope for recovery. And some unique populations will likely become extinct as the remaining members continue to age and die. With the daily stranding of the oil in the intertidal zone, some is pulled down into the sediments by the capillary action of the fine sediments beneath the coarse cobbles of the seashore. It is estimated that the recovery rate is only 4% and could take decades, perhaps even another century! Populations of many species of creatures feeding in the tidal area are not recovering. Subsurface oil is still leaking polycyclic aromatic hydrocarbons (PAH) which harms wildlife.

So if you are still interested, you should be aware that Enbridge had publicly stated that they would form another company to run any oil pipeline and transfer point in BC to the Pacific. Why would a company do that? Well, when asked about insurance coverage for a spill, they didn't answer what that would entail in the separate company, leading many to believe that any new company designated by Enbridge could simply declare bankruptcy and walk away from the cleanup costs once they exceeded their insurance coverage and leave the ongoing financial bill to the BC taxpayers! Cleverly saving Enbridge from financial disaster.
Kinder-Morgan was never willing to answer those same questions about insurance that might leave British Columbians on the hook for costs. Why? Because insurance coverage is hugely expensive! Why? Because insurance corporations are not dumb and need to assess the likelihood of a spill too.

Kinder Morgan is now officially out of their proposal for the twin pipeline pumping oil into the Vancouver harbor terminal. The taxpayers of Canada now own it. Some bitterly calling it Trudeau's Folly.
The new pipeline that our Prime Minister says ''will be built" (in spite of the Supreme Court decision) would increase tanker traffic by more than 1000 trips per year. That is 83 ships full of heavy tar sands oil navigating our pristine waters every MONTH! And not just ONE tanker a day as some pundits are telling us now. And we should all know that Alberta Tar Sands Oil is NOT crude oi at all, it is bitumen, which sinks to the bottom and continues to pollute because we cannot clean it up!

And in case you didn't know, Exxon only paid $900 million and is still in court trying to avoid a further 92 million in clean up costs 29 years later!

The world's largest publicly traded oil company reported profit at $6.9 billion for the second quarter of 2013. Of course this would not happen with a Canadian taxpayer owned pipeline but a spill would become a political issue, and you know that virtually all party politicians would work 24/7 to hide the truth of a marine disaster in BC waters. But they should beware, everything has changed and way too many people are watching these days.

The NEB did NOT consider environment when barging ahead like good little Liberals and approving the twin pipeline. It was a political decision and they left their responsibility at the terminal in Vancouver and ignored the potentiality of spills in Vancouver harbor or Georgia Straight. Not even considering lingering environmental damage, what affects our sea creatures, our salmon, and endangered Orcas. Do you care or are you like that guy calling a radio station saying the whales should just go somewhere else? We already know that fish farms have endangered our wild salmon population, and in that chain of events, we find that Orcas are already starving for lack of fish. Can fish or any other marine creature live in oily waters?

And any action in the event of a problem now scares the hell out of us. We all saw that a light oil spill in English Bay last year was still being ignored while TV stations filmed it on the news! There was simply NO preparedness for action and little ability to deal with it! And here is another kick in the head; The shipping company responsible for that spill has offered to pay only 14% of the cleanup costs!

The Exxon Valdez spill occurred in remote Alaska, creating ongoing death for sea and shore creatures. The BP spill in the Gulf of Mexico, created a huge dead zone where nothing can grow or live. A Trans-Mountain spill would happen in the closed in waters of Vancouver and Victoria. And must we consider the ULCC tankers might arrive with a capacity to load 550,000 tonnes of oil? (bitumen)  These ships are 415 meters long! (13,661 ft) almost TWICE as big as the Noordam Cruise ship which comes often to Vancouver, at 285 meters long and a ULCC is a third longer than the USS Enterprise aircraft carrier!

And don't expect the main stream media to ask the right questions as they seem to take sides now and follow agendas which don't include the interests of the people. Politicians and corporations control MSM but you already know that, don't you?

So are you, as a BC and Canadian taxpayer prepared to suffer the ongoing results?
Are you as a citizen of Earth prepared to account for how you allowed such a disaster?
Are you ready to answer your grandchildren's questions?

If your answer is NO, then get out there and start bitching to the Ottawa politicians in some far off land who pretend to represent you while catering only to their leaders and party policy.

It's not over till it's over.