I was browsing through a drugstore ad flyer last night.
They have so many good things in drugstores these days. Mostly women's stuff though. I saw a new product for girl's hair, called Bedhead. Something that musses your hair so you can match your guy's trendy Dumpsterhead I think. I wonder how the comb industry will fight back?
They had some strange groupings of sale products with special offers;
Like these women's briefs called Tena that come in a package. Of course they are made for any leakage that might be embarrassing for a gal. It happens as women grow into olderhood. As a matter of fact I can't tell my wife a joke unless she's already sitting on the toilet. She's afraid to laugh otherwise. But she rarely laughs at my feeble jokes anyway, especially when they're coming at her from under the bathroom door.
But the funny part is that you get a free six pack of Ensure when you buy the Tena briefs! Why can't men's briefs have a similar deal with a 6 of Bud? But then half a dozen beers would cause the leakage wouldn't they.
Another deal was NeoCitran and Buckleys, buy them both and they'll give you a whole CASE of Campbell's Chicken Noodle Soup!  I assume to negate the infamous taste of the Buckleys, but a whole case? What if I buy like 8 or 10 of each? I could open a soup kitchen.


But the men's thing that really caught my eye was the ad for Trojan condoms. You can get several types; the Originals, called Magnum. Or the Bareskin, or the Ultra Sensitives. Great.
The images with these names are like, er, macho; "the 44 Magnum, the most powerful handgun .... Make my day, Punk .... Did I fire five shots? Or six?" You can feel the powerful Clint glint emanating maleness overwhelming that skinny punk girl with purple and orange hair. She's helplessly receptive to your Magnum.
And the name Bareskin conjures up a buff loin-clothed Tarzan grabbing the lusty Jane and swinging her off into the jungle sunset! Gawd!  And Jane squirming and pretending to struggle and .... oops, sorry, got sidetracked.
Well, Sensitive Trojans kind of make me think of a poet guy named Seth who always wears a scarf and uses crying to get his sex. Not quite there for me, but guys will try anything. I guess it is macho in a reverse psychology kind of mode. She's sympathetic to your Sensitivity.

Yet this is the first time I have seen an ad for LARGE in condoms. Yes that's the actual name, in a big bold manguy font too. Now I can't say I know what a large size would cover, but it makes me curious. Bavarian Smokies are one thing, but those huge German bratwursts are another. Where's the division between hot dogs at the ball park and a Louisville Slugger?

I know as kids we blew up the regular sizes and had lots of fun with them, you could fill them almost full with water, and find a hill on a rainy day so you could bowl them down the center of the street and they'd go for miles on the wet pavement! And they would inflate to about the size of your thigh leg. You can probably write Der Hindenburg on this large size and fly them from a tether.
Large has so many connotations. Single guys could carry one when they go to a bar, inadvertently drop one by the table of those girls out for a night on the town. Of course your phone number is scribbled on the package. And keep a couple in your glove box in case of an emergency tire change, keep your hands clean with these rubber mittens. Take the pack out when crossing the border though or you'll be in for a strip search.
And when you buy this Large size, you don't step into the checkout lineup with hesitant stealth as usual, but wait for the cute cashier to open and slide them onto the counter face up, label readily read. L-A-R-G-E. Remember to seem embarrassed about your, um, disfigurement. 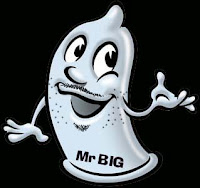 Well I am way past using condoms. And never had the need for porn star sizes anyway. But a Large size condom might be very good for keeping extra socks dry on a camping trip. Or maybe keeping your slippers on. You`d never slip. Or filling one with Cheerios and stuffing it down your pants, ala Mr. Softie. Yes a codpiece. Way better than a heavy potato down there, which can be embarrassing when it slips down and falls out your pantleg beside your shoe. Hey, don't look at me I am just guessing. I suppose I could try one, but on me it would seem like a groin goiter, nothing sexy about that. My wife wouldn't ask in a husky voice, "What is that?" pointing coyly with a pinky finger. She'd probably say, "OMG What happened? Did you slip off your bicycle seat?"  You could use one to keep your tennis balls dry. But no one plays tennis in the rain.

So all these Trojans are considered safety precautions against disease and pregnancy. And Large is something to consider if you are amply endowed. Even if you are not you could 'enhance' the package with those Cheerios. They are on sale too and after all they are the 'Breakfast of Champions'.

But I am no longer a Champion because I am marking the Centrum vitamins, Tylenol ache and pain remedies and Imodium ads. Now that's what drug stores are for. Champion only means Gene Autry's horse to me. OMG there is a connotation in there too!
I see blood pressure monitors are on sale.
And one size fits all.

Posted by Caterwauler at 1:28 pm