Today talks are starting in Kitimat about the Enbridge Northern Gateway Pipeline. So far over 4000 people have signed up to talk about this proposal.
The deal would construct a duel pipeline from the Alberta Tar Sands oil production facility, through Alberta, across the Rockies, through British Columbia, to Kitimat BC. There the oil would be pumped onto oil tankers and sent to China. 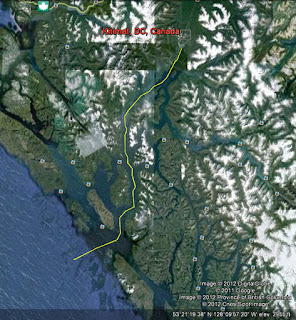 You need to know here that Kitimat is NOT a coastal port, it is miles inland through narrow channels.

Follow the line on the map to see what route these huge oil tankers will have to take through BC's coastal waters.
This is a pristine area, full of narrow fjords, majestic mountains, water-edge forests and serene waterways where the fishing is excellent and with humpback whales, wild salmon, sea otters, eagles and many other species of wildlife.


You can see for yourself on Google Earth, a free program if you don't already have it.

click to enlarge
Check out more of the pictures there too, taken by travelers and boaters in the area.

And what are the benefits of this potential disaster to British Columbians? A FEW jobs during construction and little afterward. Alberta and their foreign investors will just get richer.

Some people are suggesting it is yet another sell out of our raw resources. The Chinese are heavily invested in the Alberta Tar Sands and want our oil. Some are asking why we Canadians cannot build our own refinery and get the huge and enduring profits for ourselves, instead of shipping our crude to Texas OR China and having to buy back the gasoline.

Will we allow foreign interests once again to threaten us with an oil spill that would be catastrophic for the north of BC? We continue to ask why hasn't the Exxon Corporation paid the fines and costs of their 1989 oil spill when the Exxon Valdez defiled a pristine area of Alaska? And after all these years they are still tying it up in courts, appealing everything, making a mockery of the system and thumbing their noses at the people affected. Exxon has a $287 million damage claim and a $5 billion punitive damage claim and lowered it to 25 million which Exxon refuses to pay! Merely a few hours profit for them.
This is what you can expect in BC when they spill here. And the area is accessible ONLY by boat or plane, there are no roads. Would the area ever be recovered or become a no go like Chernobyl?

And meanwhile, why do so many people believe that BP has NOT got the Gulf oil spill under control even now? You saw that arrogance of the BP executives defying even the President of the United States! What about the Gulf dead zone? Why was BP allowed to keep everyone away (including the US Navy) from their damaged oil rigs and go on drilling more?
The potential of another environmental disaster is imminent. Right here at home in British Columbia. People need to be aware of this, and many are even questioning the polls which have even been carefully worded to diffuse the truth of the situation. 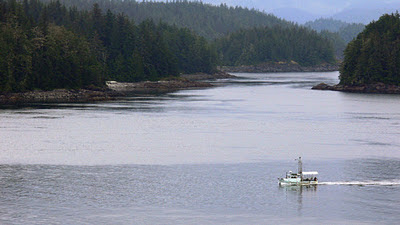 Do you want to take a chance on spoiling this perfect inland waterway for the benefit of Alberta and China?

It is not just now, folks, it is forever.


Inside Passage, BC - by jiangliu - Google Earth