At a time when teen suicides are on the rise. And damaged psyches are blamed. And self image is a huge reason for teenaged girls to be in a depression about their direction in life. And their position in various social standings may be in doubt in their own minds. The idea of ultra skinny models has always been held as a major factor in a teenaged girl's body image. 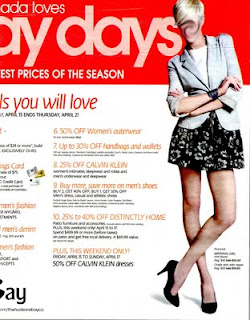 And along comes The Bay with an ad featuring a frighteningly thin girl as their clothing model.
Modeling agencies have been under fire for years now for encouraging this look. The camera gains weight, they say. You are too fat, etc.
Perhaps moving some young girls to gasp at their own mirror every morning when the real image of a young woman should be the healthy, robust picture looking back at them.

We know nothing about the young woman here. She is merely trying to make a dollar. But is she suffering anorexia? Did she diet to lose weight? Was she encouraged to do so? Does she smoke to keep the pounds off?
That is not a natural woman or an athletic body, it is one that needs to have some advice from a doctor, an MD and perhaps a psychologist too.

Kate Winslet successfully sued a tabloid for morphing her thinner as misrepresenting her. Jamie Lee Curtis bravely did a full magazine spread  to show a true look and refute the Hollywood image of herself. Maxim magazine once morphed Lucy Lawless into a 90 pound woman who could sleep in a picket fence! And we all know that Xena was actually robust, strong, dangerous AND beautiful! 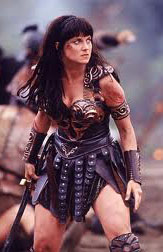 (She needed to be to pack all that leather and weaponry around!)

When the effects of body image are so detrimental among young women as to be a factor in teenaged suicides, one would think the Bay would have had a closer look at the models and modeling agency representing their image too. After all, they are selling the corporate brand as well as the clothing.

One wonders who's psyche is really damaged?