Flicking around the other night during the Games. No Olympic hockey on the tely. No skiing. No moguls. Flick. Flick.
Wait, what was that? (flick back) Ooo, whooo is she? Nice. Canada's Cheryl Bernard. Wow. What a great looker.
(Steady gaze) Very nice and she seems to be playing some sort of game. Oh yes, curling. My my. Intense too when throwing a rock. And what's that she's shouting? Hard! Hard, harder! OMG. (Of course this is 'dirty old man' think.) 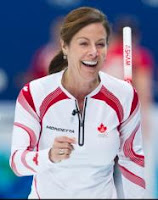 So I watched Cheryl for awhile. And came to the conclusion that maybe curling is actually a good sport.
I used to think it could be improved with body checking. Used to think it was boring. So between ogling Cheryl and watching what she was actually doing, I realized this sweet looking woman is extremely good at her sport. And curling is pretty interesting. Full of strategy and thought. Someone said chess on ice. Later I tuned in the Canada mens games and noted that Kevin Martin was accurate as hell in leading his team to victory too.

So of course I began watching curling at the Olympics. And several friends have found the same thing, that curling is an interesting sport that it is much more complex than I had imagined.
Now I am watching several curling games/matches/contests. And the bonus for a d.o.m. is that the women are so good looking. Can you say that?
So do they care how I got interested in curling? Do they care that I wonder if Cheryl will appear in the Canadian edition of Playboy? The announcer said 'curling is sexy', not me.
Well, I am now a fan, I think they care about that.

And I can say that Cheryl Bernard got me into curling.

adenda - The team won silver medal!
Posted by Caterwauler at 9:37 am