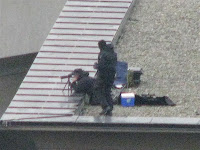 I don't know if these men in black were Vancouver City Police, VANOC Integrated Security Unit, or RCMP, but there were 7 of them up there on a rooftop overlooking BC Place yesterday.
They were positioned on each corner of the building and watching the huge crowd coming in for the opening ceremonies.
You might notice the rifle scope sticking out of the bag.

It started raining and got cold as the gray day wore on. But they were vigilant on that rooftop, watching everything below with scopes and binoculars, just popping up their hoods and ignoring the chill.
I watched them into the rainy night. When it got really dark I could barely see them, on that roof, lurking in the shadow. Watchful. Scanning below. The ceremonies ended just after 9 pm and it became a driving rain. 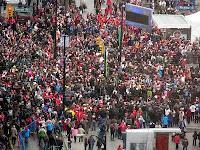 Gretsky, taking the final torch to light the waterfront cauldron, endured it for a few moments, although perhaps warmed by his Olympic torch, and got huge applause. Happy people left BC Place and the street party began, enthusiasm undampened by the cold rain and the night.

I went to bed at 1 am and had a last look through a scope at that black rooftop. I could barely pick them out until my eyes adjusted, but they were still up there, standing darkly on the corners of that roof like ethereal gargoyles. 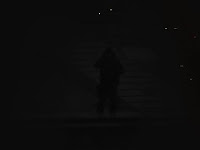 They were still there looking out for us, folks, you and me.

Over 60 thousand people attended those magical opening ceremonies, most of them proud of Canada and Canadians and unaware they were being looked after so well.

I suggest a huge thanks and a round of applause for them too.
Thanks guys.
Posted by Caterwauler at 2:49 pm