Former Prime Minister Brian Mulroney, in a new book, criticizes former Prime Minister Pierre Trudeau as having a lack of moral fiber to lead. He slams Trudeau for his teenage years as an activist. No mention in his book about the Airbus scandal or his own moral fiber while in office as an adult.
This from the man who many consider the biggest crook Canada ever had. Who thousands wonder where he is getting the money to live like a billionaire. Who the RCMP may be STILL investigating for bribery in the Airbus scandal. Who was the first Prime Minister in Canadian history to be the subject of a criminal probe. Who even tried to steal the furniture from 24 Sussex Drive.
Who threatens to sue anyone who looks into his background at the drop of a secret paper. 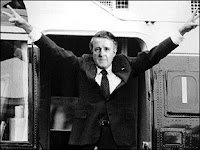 Except: Stevie Cameron, who wrote the book, On The Take, an investigative report on the scandalous Mulroney and a bombshell exposé of crime, corruption and greed on his watch. For some obscure reason he hasn't sued Ms Cameron. Hmmm.
"I am not a crook."
Where have we heard that phrase before?
Posted by Caterwauler at 10:42 am