Are the so called energy drinks an entry point into other 'high inducing' methods of synthetically elevating your physiology? Aside from the fact that they are giving you a potent spike of vigorous activity they might be an introduction into artificially enhanced sports performance. Do young people need that in this era of Mark McGuire, Barry Bonds and Ben Johnson?
During a recent boys soccer game in Langley, one 8 year old collapsed on the field after complaining about sharp chest pains, numbness in his arms and shortness of breath. He was rushed to hospital with a dangerous heart rate and elevated blood pressure. After an ECG the doctors said it was the Full Throttle energy drink he had consumed prior to his game. One can't imagine the parents actually allowing the boy to have this drink, we assume he did it on it's own.
But the fact that an 8 year old thought he needed such a boost is disturbing.
A Brown University study concluded that energy drinks should not be used while exercising as the combination of fluid loss from sweating and the diuretic quality of the caffeine can leave the user severely dehydrated. There are many websites with information on these drinks. 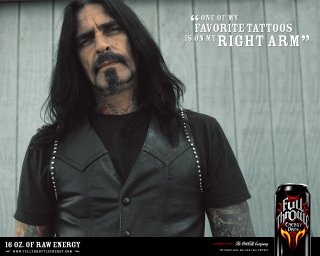 And check out a few of their products, especially Full Throttle from Coca Cola - The heading is "Let your man out" with an explosive can and a huge black ominous looking truck, with a black dressed trucker or biker dude looking as tough as he can. One thinks the demographic they are trying to reach are the same WWW Raw rasslin' fanatics mentality. They even have a page called 'badass downloads' with pictures of that drug dealer looking guy you see on the worst news at 11:00. That guy pictured here is actually on Coca Cola's website!
Some other drinks, many with subliminal sexual suggestions, are Red Bull, Monster, Boost, Rockstar, Hype, Rush, Atomic X, Socko, Fuze and the best of all, Pimp Juice! You can even download a song from their website called 'Doin' what a pimp do.'
Do children need performance in sports? Aren't they supposed to be having fun? Aren't these drinks selling something scary? Are they on the verge of promoting drug use as a way of life? Do we want children to emulate the kind of person who needs these drinks? Is the next step a little pill delivered to the 8 year old to make him run faster and kick harder?
I'm not saying they are marketting to children, but beware parents, a new threat is emerging.
As if you needed another.