BC Place Stadium is about to come under attack, no, not from the wind storms but from the insidious developers. They are drooling at the possibility of quick riches from condos on the site and could care less about BC Place, the BC Lions or any other event that our stadium hosts. They could care less about Vancouver. Watch for their buzzwords to start ... losing money, leaking roof, high costs of repair, valuable site, bad stadium anyway, not intended for long term, and the worst yet to come; dangerous.
Filled with dreams of money filled sugar plums, these 'developers' will use the latest storm damage to full advantage to convince the powers that be to, "tear the damn thing down and let us build our condos there. You'll find another place for a stadium." 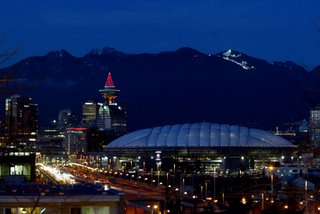 Don't let it happen. BC Place is the envy of other cities that have allowed this talk to take hold and have lost a downtown stadium or arena site. BC Place doesn't have a bad seat in the house, it is an excellent venue for any event we care to have there. Olympic Games, concerts, shows. It is world class. If it needs a new roof, go ahead and put one on! It'll last until 2032! And like it was said when first built, a bargain at that price.

Why am I worried? BC Place Stadium is a division of Pavco (BC Pavilion Corporation), a Crown Corporation of the Province of British Columbia, and we all know now how our provincial government under Gordon Campbell feels about British Columbia's assets: sell 'em off.

It's ours, don't let the whispering money hungry sleazy 'developers', snatch it away, tell THEM to go elsewhere and build their little boxes made of ticky-tacky.
Keep BC Place for Vancouver.

Posted by Caterwauler at 5:22 pm