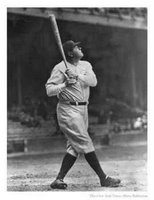 Not taken into account =
Bonds - detested by fans
Ruth - endeared by fans.


The Sultan of Swat eyeing another homer.

UPDATE: The US government has now launched a lawsuit against Bonds for perjury in a previous testimony regarding his denied use of steroids. In a related issue, four junior league baseball players have been suspended for using banned drugs. It's working its way down. We'll be seeing muscular, bald ten year olds in Little League soon.

Posted by Caterwauler at 7:31 am