Coming soon to the NHL

Greed. Someone at NHL headquarters has figured out that the league could pocket another 2 billion dollars by having corporate logos on the jerseys of hockey players! Brilliant.
And not only that, but they want to bring back the once tried and failed illuminated puck. Which was brought in because some genius said Americans cannot see the puck during the play. And having a colored swoosh following it would illuminate the game for all those Arizona Republicans and Florida Octagenarians to see. Did I say swoosh? OMG! we're going to have a Nike puck!

"Did you see it that time, Martha?"
"No Harold, I saw him wave his thing around though. And then they started screaming, can you turn it down?"
"Whaat?"

But about those logos on the NHL sweaters. I don't know what you're thinking, but I am imagining the game calling as it happens in the future NHL. You must have noticed that your favorite TV shows no longer have that tag at the end which sums up the show, and has credits rolling over it. Yes, folk, they have added about two more minutes of commercials! But sorry, let's go back to the NHL jerseys, professional sports and the point; greed.

The corporate logo is coming. When you buy the jersey of your favorite player, say Kevin Bieksa, it could have a big FORD logo where the Orca used to be. And on the back, under his name, it might say, 'Brought to you by the new Ford Fusion.'  Not a nanosecond of confusion for NHL brainstormy executives.

So what is the game going to sound like when you hear it? I can tell you, not like the old Danny Gallivan days for sure ....  'Richard shoots and scooorrrrres." They might need fast-talker experts to call it.
This is how it could go .....

"Bieksa brought-to-you-by-Ford brings the puck out from behind his net, a short pass to Dan Hamhuis famous-Black-Forest-hamhocks and a tap over to Daniel Sedin Kia-Sedona-for-reliability who circles inside the Blue-Mountain-coffee line and there's the slap-pass to Henrich Re/Max for-condo-living-homes Sedin! Ooh the Nike puck hopped over his Timberland stick. But a hard hit along the Rona boards and Burroughs A&W no-steroids-chicken recovers, a drop pass back to Zack Kassian Denturists-R-US and he shoots!    Oh! stopped by Roberto Monsanto-is-good-for-you Luongo!  We'll be right back after these messages."
Is cacophony the word?

"Martha, do we have enough toilet paper rolls to last?"
"Harold, you always drove that Olds too fast."

Are you ready for it? Some believe the game might be too fast to call unless they put a sand floor in the player's boxes to slow them down a bit. And the new look NHL audio calls will have no room for the old multisyllable words like 'discombobulated' and  'accelerated', or 'scintillating' or even 'altercation' and 'pugilism'. 'Hack' 'whack' and 'smack' will be about it. (apologies to Tommy Larscheid) 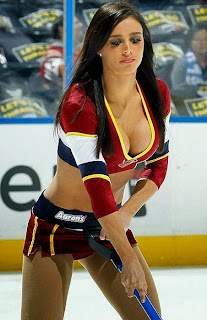 And can you imagine that a constantly whirring, flashing and darting puck might bring on an epileptical dazzle by the end of the first period, tardive dyskinesia before the third and tinnitus for the next two weeks! There's going to be a team in Las Vegas, you just KNOW there will be flashing lights on that casino uniform. These guys have stars in their eyes that don't twinkle! Even the Ice Girls won't be able to calm your frazzled mind. Notice the ad on her hip .... you haven't gotten to the hip yet?  Never mind.

Advertising everything, everywhere all the time is what the NFL/NBA thrives on, is the NHL bound to follow? The boards started it all. 'Fly Emeritates' as you fling headlong into them? Are they supplying the sand? Now the glass behind the goalie has CGI ads on it. The stairs are cleverly painted to sell you something before you can get out. All in the name of extra revenue. Is the game being lost in the quagmire of messages? And how many corporations will be lining up for a logo imprint? Dodge RAM of course, but don't put me on a Swede? Viagra? There's a natural.  Microsoft won't be there, micro and soft just don't do it. You'll be Googled after a hard hit, and the tunnel for players will be the YouTube. Wolfgang's restaurants? The puck stops here?
Okay okay, I'll stop, but you know the assault on your senses will continue. Smell anything yet? Burnt rubber?

Sheeez, no, you don't eat the Wheaties IN the Stoli!