One of the strongest magnets in the universe, a magnetar, is unexpectedly capable of a strange new kind of glitch — a mysterious, unexplained drop in speed, researchers say.
Unraveling what briefly put the brakes on this powerhouse's spin could help shed light on states of matter that scientists currently are not able to recreate in labs.
They've called this event an 'anti-glitch' because it affects the star in exactly the opposite manner of every other clearly identified glitch seen in neutron stars.

Magnetars are a type of neutron star, which is the core of a massive star that devoured all its fuel, collapsed under its own weight and then exploded as a supernova. Magnetars are also often thought of as the most powerful magnets in the cosmos, with magnetic fields up to approximately 5,000 trillion times that of the Earth's. Astronomers have discovered less than two dozen magnetars so far.

"Magnetars are spectacular and mysterious objects," study co-author Victoria Kaspi, an astrophysicist at McGill University in Montreal and leader of the Swift magnetar monitoring program, told SPACE.com. "They can unleash extraordinary explosions and have the highest magnetic fields known in the universe, but they're relatively tiny, just the size of a city or so. How do they combine all that? We really want to understand them better."

So here's my answer to the sudden slow down of the object, and the reason for the flash of power suddenly emanating from them.


Imagine looking at the star as a clock. The star is revolving, let's say clockwise, the core and crust is rotating at the same speed.
Then a large meteor hits the star at the 8 o'clock position, which would cause a counterclockwise jolt at the impact point. That would cause the star to have a momentary slow-down in the crust from the impact, but not the core, and could cause the core liquid to erupt through the crust at the impact point. And because the core was now going faster than the crust would emit that spectacular burst of Xray.

Meteors travel at anywhere from 15 to 70 kilometers per second! (Around 150 thousand miles per hour) And only burn up from friction when encountering an atmosphere like here on Earth. Without an atmosphere to slow it down, a meteor would hit the surface like a bullet.


The revolving liquid inner core would not slow down from the impact, but continue to speed inside the magnetar and serve as a motor because of it's momentum, to bring the crust back up to speed eventually. 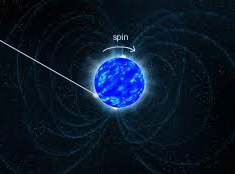 Magnetar being struck by meteor