She already copied Madonna's Express Yourself with her Born this Way. She can't seem to meat up with any originality! After leaking the lyrics on her Twitter account, Gaga debuted the single. And while 'Born This Way' remained a trending topic on Twitter all that morning – another began trending as well: 'Express Yourself,' as in Madonna's 1989 Top 10 hit. By late morning, 'Express Yourself' had become more popular than 'Born This Way' on Twitter, with fans and foes alike comparing the songs.] You can watch the Madonna hit here - http://caterwauls.ca/MadonnaPage.htm 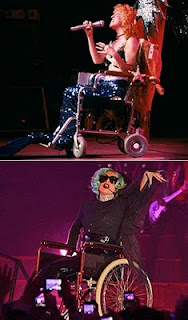 So now Lady Gaga has arrived on stage in Sydney, Australia in a wheelchair ala Grammy winner Midler. Did she think she was far enough away that no one would notice? But we all know the Divine Miss M has her own original style, and some would think that her wheelchair routine as mermaid Delores Delago should be untouchable as a signature character!

There was plenty of controversy to go around after Lady Gaga's show in Sydney. Aussies threw eggs at the singer (sic) as she left a bar, (perhaps they thought she was wearing ham?) and activists were enraged when she came onstage in a wheelchair dressed as a mermaid character. ? Is there a 'Legs for Mermaids' movement somewhere? Only in OZ.
It is interesting to note that the first mermaids, spied by starved sailors at sea, were actually dugongs!

Midler, our Lady of the Perpetual Smile, was critical of the Gaga at first, tweeting the message that she had been performing her mermaid character since 1980 - ‘You can keep the meat dress and the firecracker tits - mermaid's mine'.
Then being the classy Babe she is, said it was okay.

Did Lady Gaga think 1999 and 1980 were so far in the distant past for people to remember the originals? Hmm. I suppose her fans weren't born yet so what would they know?

What's next? Maybe she needs to go back further, no one would remember Judy Garland's Over the Rainbow. (1939) Would she do it dressed as the Tin Man, not knowing anything about the original. If that isn't a signature song I don't know what is.

Alas, maybe it is time for me to move on, I just remember too much.

One thing she cannot steal, The Divine Miss M's routine, 'Pretty Legs and Great Big Knockers'  fans have been going gaga over that for a long time. And the Lady is unfortunately missing in those attributes.

Pretty legs and great big knockers will always be Bette Midler!
You can't steal that kind of talent.